The Hatfield Peverel Allotment Association has been around for over a hundred years, below is an article written by David Goodey and makes good reading!

Garlic is largely pest and disease free, but sometimes ‘rust’, a fungal disease of the foliage, can be damaging. If this happens, then grow garlic in a different part of the garden in future years and destroy all of the infected leaves.  White rot disease is present in some soils and attacks the roots. If this happens grow garlic in tubs of soil-based potting media, such as John Innes No3 compost

This fungus causes the leaves to wilt and turn yellow. Under wet conditions, the plants may not wilt but will become loose in the soil. If you lift them, you will see a white fluffy growth on the bulbs.

Remedy: Throw out any infected bulbs, and don’t grow leeks, onions or garlic in that spot again for at least eight years. This is a very persistent fungus that survives in the soil for a long time. There is no chemical control.

This is a fungal disease causing bright yellow spots on the leaves. It is often worse in long, wet spells.

Remedy: Mild attacks of rust won’t affect the plant, but serious infections may cause leaves to shrivel and affect yield. There is no control for rust once you have the infection. Make sure you don’t crowd plants as this increases both humidity and the likelihood of infection. Dispose of any badly affected plant material, and don’t grow garlic, leeks or onions in the same spot for three years. 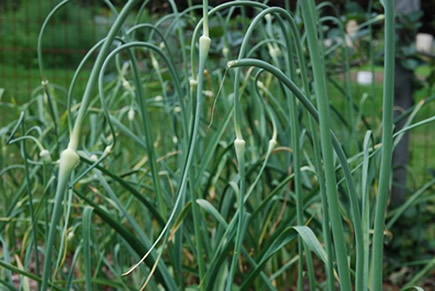 These can be a problem, pulling the shallow-rooting plants out of the ground.

Remedy: Place chicken wire, fleece or plastic netting over plants to keep the birds off. They are usually not such a problem when the plants are older and growing strongly.

Two leaf mining pests that can cause damage to the foliage of garlic and other members of the Allium family are the allium leaf-mining fly and leek moth.

Homity pie is a traditional British open vegetable pie. The pastry case traditionally contains a filling of potatoes and an onion and leek mixture, which is then covered with cheese.  It has a history that dates back to the efforts of the Land girls of the Second World War and the restrictions imposed by wartime rationing.

This simple aubergine parmigiana recipe from Italy makes a cosy mid-week meal. Serve this cheese, tomato and aubergine bake as a vegetarian main dish, with some wholewheat garlic bread or a peppery rocket salad, or you can also make it as a hearty side for for a meat dish.!

Perfect Roast Potatoes
My foolproof way of getting that perfect roastie!

Jobs to do in January

January is generally a very cold month with hard frosts freezing the ground and when the ground isn't frozen it is generally too wet to do much although there are no guarantees with British weather. Looking through my diaries, snow isn't that likely for a prolonged period but you never know.

The Growing Season varies in different parts of the United Kingdom, but in Hatfield Peverel we are blessed with a milder climate and enjoy a longer season than many parts of the country.

In this section of the web site I have tried to separate the season out into monthly sections to help and guide you through the most popular tasks and crops regularly grown on the allotment site, but if you would like a feature made of a particular vegetable or task, please get in touch and I will do my best to add it to the web site for you.

Jobs to do in February

Time to do some groundwork

We get a glimpse of the early signs of the arrival of Spring this month. The soil begins to warm up around the middle of February and we can see for the first time this year the buds beginning to swell on fruit trees and bushes. Overwintering vegetables begin to look less sorry for themselves and they start to produce new growth.